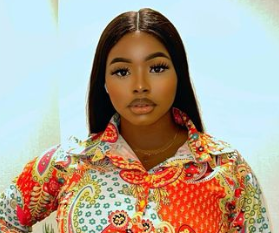 Richie Demorest, real name Inyene Obong, is a Nigerian Instagram model and social media influencer from the southern Nigerian state of Akwa Ibom. In Nigeria, she rose to prominence by posting Instagram model photos and promoting brands through her Instagram page. She has also appeared in a number of skits with top Nigerian comedians.

Richie Demorest (Inyene Obong) rose to prominence as an Instagram celebrity after she began posting photos of herself online. Her pictures got a lot of engagement from people, hence brands began contacting her to promote their products. She has an impressive following on Instagram with more than 379K followers. Richie Demorest has also appeared in a number of comedy skits performed by top Nigerian comedians.

There is no much information about Richie Demorest’s family. However, she was raised by her grandmother in Aba, Abia state.