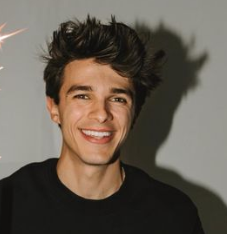 Brent Rivera is a social media personality and actor from the United States who rose to prominence on the now-defunct video hosting service Vine. He has a sizable fan base on Instagram, TikTok, and YouTube. His YouTube channel has over 22 million followers. He was also a huge hit on Vine, where he has over 8 million followers.

Brent Rivera is the co-founder and CEO of Amp Studios, a talent incubator and content group that in 2020 generated 10 billion social media views each month. His business partner is Matt Levine, who is also his manager. Their goal is to tap into media monetization and become “a Disney Channel for the digital generation.” He also has a clothing line called Relatable and started a pop culture-centric podcast called So Relatable in 2021.

In 2015, he participated in Coca-Cola’s #MakeItHappy campaign and worked with Hollister Co. in 2019 on their anti-bullying campaign.

He has two brothers, Brice and Blake, and one sister, Lexi. His parents are named John and Laura. He dated Eva Gutowski in 2019. He also dated model Morgan Justus. He began a relationship with fellow TikTok star Pierson Wodzynski in 2021. His father is John Rivera, a firefighter, and hus mother Laura Rivera, is a teacher.